A Retrospective of Work by John Littleton and Kate Vogel

John Littleton and Kate Vogel are nationally renowned American Studio Glass Movement artists who work and reside in Bakersville, North Carolina. Their creative partnership began in the mid-to-late 20th century when they began collaborating on their first glass pieces in 1979 after meeting as art students at the University of Wisconsin–Madison.

John Littleton and Kate Vogel create sculpturally blown and cast glass works and installations that speak to the importance of their relationships to one another, their family, and their community. This retrospective exhibition highlights important works, milestones, and innovations in their shared careers, all while tying their experiences and influences back to John’s father, Harvey Littleton, an American glass artist, educator, and one of the founders of the American Studio Glass Movement.”

Harvey Littleton, whose influential work will also be show in the exhibition, is often referred to as the “Father of the Studio Glass Movement.” In his role as an educator, he initiated the first hot glass program offered by an America University at the University of Wisconsin–Madison and promoted the idea of glass as a course of study in university art departments in the United States. Littleton’s students went on to become the dominant figures in the American Studio Glass Movement while broadening the study of glass art and university-level hot glass programs throughout the U.S.

Kate Vogel and John Littleton’s work has appeared in several group exhibitions, such as the Sculpture Objects and Functional Art (SOFA) in Chicago and the Smithsonian Museum of American Art in Washington, D.C. Their glass works can also be seen in private and public collections in North America, Europe, and Asia. Locations include the William J. Clinton Presidential Center and Park in Little Rock, AR; the Museum of Contemporary Design and Applied Arts in Switzerland; Glasmuseet Ebeltoft in Denmark; the Corning Museum of Glass in Corning, NY; The Mint Museum, Charlotte, NC; High Museum of Art, Atlanta, GA. Features on their work have appeared in various publications—such as The Washington Post, The New York Times, Christian Science Monitor, and CBS Sunday Morning. 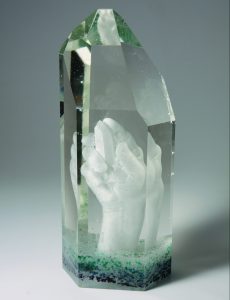 Don’t miss the Between Us special events!

Exhibition Sponsors:
Bergstrom-Mahler Museum of Glass gives a special heartfelt thank you to Sharon and John Amdall for their generous sponsorship of this exhibition. We also thank the Art Alliance for Contemporary Glass, AACG for providing additional programming support for the exhibition. Additional thanks to The Boldt Company fotr support of Between Us.

During the reign of Alexandrina Victoria, Queen of Great Britain, Ireland, and Empress of India (1837-1901), English and American glass factories responded to the rise of consumerism and the increasing desire for everything glistening and ornamented by creating and marketing fanciful glass table decorations for middle and upper-class households. The art glass basket reached the height of its popularity between 1880 and 1890. These colorful and highly decorated works of art glass represent both ingenuity and technical skill. Frequently embellished with ruffled rims and applied handles shaped in loops or decorated with thorns, these baskets proved to be popular wedding gifts and were a mainstay in Victorian homes. Now on exhibit in the Mabel R. McClanahan Memorial Study Gallery.

Primordial Shift consists of hand-blown glass ears of corn suspended on stalks of cast bronze suspended from the ceiling, by Michael “Mick” Meilahn.  The installation is a multisensory experience with audio and video projections that mimic the gentle sway and vastness of a corn field. Meilahn, who comes from a long lineage of farmers, learned glassmaking as a college student in the 1970s, and subsequently participated in the wave that became The American Studio Glass Movement.

Meilahn’s installation is about the fragility of glass and genetic modification of corn. His installation will afford Bergstrom-Mahler guests the opportunity to consider the perspective of this unique and amazingly talented farmer and visionary artist. In addition to the Primordial Shift installation, this exhibition will highlight other works created by Meilahn over his forty-plus year career in glass. From diminutive works of mixed-media to towering figurative sculptures, the evolution of Meilahn’s creative vocabulary speaks to his intrinsic desire to promote learning and advocate health consciousness.

About the Artist:
Michael “Mick” Meilahn demonstrated an interest in art as early as high school, but attended college as a part of the agriculture program at the University of Wisconsin – River Falls. After deciding that the business side of agriculture did not interest him, he switched his major to art. In 1966, Meilahn learned how to blow glass and was hooked. He went on to study abroad at glass studios in both Germany and The Netherlands. After a year volunteering with the Peace Corps in South America, he resumed his college classes, graduating with a BS in 1971, followed by an MS in art from Illinois State University three years later.

Bergstrom-Mahler Museum of Glass is grateful to David J. Wagner, L.L.C. for providing assistance with the display of Primordial Shift.